Clinton Fire Department
HomeAbout UsAddress SignsApparatusCPSC RecallsCadet ProgramCall HistoryCall TotalsCall VolumeCarbon MonoxideContact UsERGEvents CalendarFOIA RequestFilesFire NewsFire PreventionFire Safety City SweepGuestbookInsurance Service OfficeJuvenile Fire SetterKnox-Box Rapid EntryLinksMembersNewsNewslettersNote from the ChiefPicturesShift CalendarSmoke Detector ProgramStoreTIER II SubmissionThe FallenVideo
News headlines
Clinton City Council Appoints New Fire Chief
The City of Clinton City Council unanimously decided to accept the appointment by Commissioner Ballenger of Stephen Page to the rank of Fire Chief. Stephen Page became a firefighter for the City of Cl...
➠
Chief Jeff Hoke Retires From The CFD
Fire Chief Jeff Hoke Retired Saturday from the Fire Department. Chief Hoke stepped in the rank of Chief in 2017 and served in the position till his retirement. At this time the position has not been f...
➠
Raffle Tickets!
Get your Fire Department Raffle Tickets! Come by the Fire Station or stop any Clinton, Wapella or Kenney firefighter to get your ticket! $1.00 for One Ticket or $5.00 for Six TicketsFirst Place Winner...
➠
Clinton Firefighters May Look a Little Different 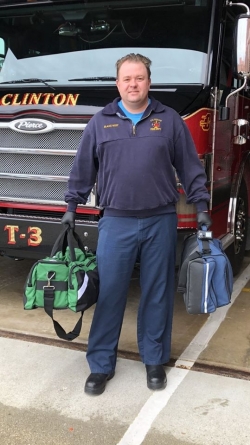 For precaution only due to the coronavirus you may see firefighters coming to your aid looking like this. These precautions are only being made to continue are service without interruption. We must in...
➠
Fire Prevention

Captain Lyle Denison oversees Fire Prevention in the City of Clinton. Lyle has been successful every year reaching every home in the city offering them a free smoke detector and preventive fire inspection's. Lyle also has contact with every elementary school student at least once a year insuring they go home with information on home safety plan's and walk's them through the Clinton Fire Department educational smoke house.

Fire Prevention Week was established to commemorate the Great Chicago Fire, the tragic 1871 conflagration that killed more than 250 people, left 100,000 homeless, destroyed more than 17,400 structures and burned more than 2,000 acres. The fire began on October 8, but continued into and did most of its damage on October 9, 1871. According to popular legend, the fire broke out after a cow - belonging to Mrs. Catherine O'Leary - kicked over a lamp, setting first the barn, then the whole city on fire. Chances are you've heard some version of this story yourself; people have been blaming the Great Chicago Fire on the cow and Mrs. O'Leary, for more than 130 years. But recent research by Chicago historian Robert Cromie has helped to debunk this version of events.

The 'Moo' myth Like any good story, the 'case of the cow' has some truth to it. The great fire almost certainly started near the barn where Mrs. O'Leary kept her five milking cows. But there is no proof that O'Leary was in the barn when the fire broke out - or that a jumpy cow sparked the blaze. Mrs. O'Leary herself swore that she'd been in bed early that night, and that the cows were also tucked in for the evening. But if a cow wasn't to blame for the huge fire, what was? Over the years, journalists and historians have offered plenty of theories. Some blamed the blaze on a couple of neighborhood boys who were near the barn sneaking cigarettes. Others believed that a neighbor of the O'Leary's may have started the fire. Some people have speculated that a fiery meteorite may have fallen to earth on October 8, starting several fires that day - in Michigan and Wisconsin, as well as in Chicago.

The biggest blaze that week While the Great Chicago Fire was the best-known blaze to start during this fiery two-day stretch, it wasn't the biggest. That distinction goes to the Peshtigo Fire, the most devastating forest fire in American history. The fire, which also occurred on October 8th, 1871, and roared through Northeast Wisconsin, burning down 16 towns, killing 1,152 people, and scorching 1.2 million acres before it ended. Historical accounts of the fire say that the blaze began when several railroad workers clearing land for tracks unintentionally started a brush fire. Before long, the fast-moving flames were whipping through the area 'like a tornado,' some survivors said. It was the small town of Peshtigo, Wisconsin that suffered the worst damage. Within an hour, the entire town had been destroyed.

Eight decades of fire prevention Those who survived the Chicago and Peshtigo fires never forgot what they'd been through; both blazes produced countless tales of bravery and heroism. But the fires also changed the way that firefighters and public officials thought about fire safety. On the 40th anniversary of the Great Chicago Fire, the Fire Marshals Association of North America (today known as the International Fire Marshals Association), decided that the anniversary of the Great Chicago Fire should henceforth be observed not with festivities, but in a way that would keep the public informed about the importance of fire prevention. The commemoration grew incrementally official over the years.

In 1920, President Woodrow Wilson issued the first National Fire Prevention Day proclamation, and since 1922, Fire Prevention Week has been observed on the Sunday through Saturday period in which October 9 falls. According to the National Archives and Records Administration's Library Information Center, Fire Prevention Week is the longest running public health and safety observance on record. The President of the United States has signed a proclamation proclaiming a national observance during that week every year since 1925.

The Clinton Fire Department takes Fire Prevention very seriously and takes great pride in the work we do with the school children and local businesses teaching fire safety, we have many tools available including our Fire Safety Smokehouse for children, and our Fire Extinquisher Simulator for adults that enable us to better serve the community.  If your school or organization would like assistance putting together fire prevention training please contact the Fire Prevention Coodinator.

Promote Your Page Too

This site has been viewed 171,657 times.
Calls
News
Events
Pictures
Apparatus
Maintained by the members and staff of Clinton Fire Department. Designated trademarks and brands are the property of their respective owners. Copyright © 2006-2022. YourFirstDue Inc. All Rights Reserved. Content on this web site is supplied by Clinton Fire Department. YourFirstDue Inc. cannot be held responsible or liable for any content, text, pictures, or any other media found on this web site.
Management login
Powered by